Minicars are new in the U.S., so the actual target market hasn’t yet been identified.   What has been established for sure is that the Chevrolet Spark is the newest contender in sub-compact cars like the Fiat.  Starting at under $15K, the Chevy Spark is hard to be ignored; two upgraded trim levels are available, it has 10 airbags and 60/40 split rear seats, and more passenger and cargo space than the Fiat, the Smart fortwo and the Scion IQ.  What’s even more attention-grabbing are the Spark’s looks – it looks more like a luxury sedan shrunken down, with its bold styling, alloy wheels and style from bumper to bumper. 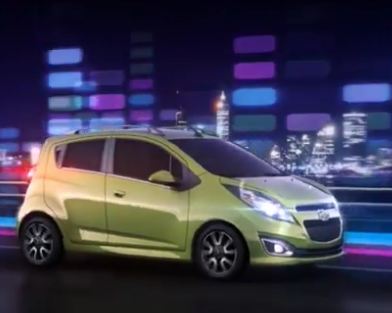 Chevy realized that “About 90% of expected Spark and Sonic buyers own smartphones,”said Cristi Landy, marketing director for Chevrolet small cars.  “This technology is typically found on cars costing far more, but next-gen customers are accustomed to being connected.  By using a smartphone app, Chevrolet found a smart and safe way to provide navigation.”  $50 for a nav system is pretty smart…

The Gogolink app brings all the maps from your phone to the 7″ screen – for about $50, whereas nav systems on most vehicles cost in the upwards of $1000.  Since Chevy was smart enough to use the driver’s phone to drive the Gogolink app, the only limits are what you download… even at under $15K, you can still stream movies to the dash screen.  You’ve got compatibility for any device with Bluetooth, SiriusXM Satellite Radio, and the OnStar RemoteLink app.

It’s obviously an ideal city car, but the spark doesn’t fizzle as it drives away from the lights.  “Bigger on the inside than it is on the outside,” the Chevy Spark will deliver over 40mpg combined on average, and that’s a conservative estimate.  That means that even with family and equipment in-tow, you’ve got enough room to fit everyone and you won’t be stopping to refuel along the way.

SHOP FROM HOME FOR YOUR PERFECT CHEVROLET!

WE WILL DELIVER YOUR VEHICLE STRAIGHT TO YOU!