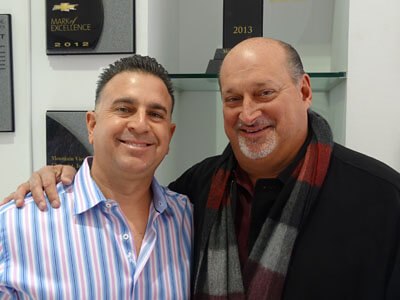 Chris Leggio, President (R) and Nick Cacucciolo, Vice President(L).
"Our number one goal is employee satisfaction” not “Customer Satisfaction.”These are the words of Chris Leggio, one of the owners of Mark Christopher Auto Center. It just makes sense. Something so simple, yet it was actually the first time that I had heard it. Now it is not that “Customer Satisfaction” wasn’t the very next thing out of his mouth. It was. But what came next was the most interesting theory of all… “I don’t think you can have satisfied customers without satisfied employees. At least not consistently.”“I don’t think you can have satisfied customers without satisfied employees, at least not consistently…”In a business like the automotive industry where you can go into a dealership and often see different sales staff from one week-one DAY- to the next, and the average employee tenure is somewhere along the lines of a Hollywood marriage, it’s refreshing to see an owner, and a dealership taking a different approach. Mark Christopher has 20 employees who have been there for over 10 years, and 9 who have been there for over 20! No doubt, one of the reasons that Mark Christopher Auto Center is vying to be the #1 GM Dealer in California for the 3rd year straight. Mark Christopher has been family owned and operated for over 40 years. The dealership was originally started by Chris’ parents, Charles and Shirley, who purchased it in 1975, and named it after their sons-Mark and Chris, naturally. Originally, it was just a Chevrolet dealer, but has gone on to include Buick, GMC and Cadillac. Both Chris and Mark worked at the dealership growing up, in different capacities from washing cars, to working as techs and salespeople. How do you know that Chris is passionate about this business? Well, he’s tried everything else. While attending Loyola Marymount in the 80s, Chris was heavily involved in sports. Not playing, but as a commentator, and statistician. He worked as a public address announcer, and a color analyst for several sports, including baseball and volleyball. He also had an interest in law, and took some classes while at Loyola. Upon graduating, Chris considered a career in media, and even got some job offers, but the prospect of doing commentary for obscure sports in far away locales for peanuts, just wasn’t that appealing. He considered a career in the legal field for a bit, but in the end, he knew that his heart was in the automotive business. Shortly after graduating, he met his wife, Michele at a Cal State Fullerton graduation party for his cousin, Tom. They have 3 great kids together, and if you want to know what Chris’ other passion is, just talk to him about his family. His oldest son, Nolan is currently attending USC, at the Marshall School of Business, and has done an internship at a law firm. Erik, his youngest boy plays varsity volleyball, soccer, and runs on his high school cross country team. And then there is Nicole. Not only is she a fantastic soccer player, on the St. Lucy’s Priory team, but also, the prestigious Albion USA Soccer Team, and is ranked amongst the top 150 players in the nation. She also hopes to play on the U.S. Olympic Soccer Team someday. Chris would love to see any or all of them, join the dealership, at some point, but wants them to pursue whatever other opportunities they can, and make sure that- like him- they join for the right reasons.When asked which one of his kids is likely to take over the dealership, he chuckled and gave a prediction. That prediction has been purposely omitted to help keep the peace;-) Chris’ wife works full time as a fitness instructor, teaching everything from pilates, to water aerobics and spinning. When asked if it’s tough to work so closely with his brother, Chris said simply, “Let’s just say we agree to disagree. We both have similar philosophies, but just different ways of going about it.” One thing is for certain, they both value family, their employees, customers, and the community. Mark Christopher Auto Center sponsors, and is involved with groups as varied as the American Heart Association, and YMCA, to local area high schools. We had a piece a while back about Mark Christopher’s commitment to kids and education with their involvement in the Cool to Stay in School program. See The Link Here Happy employees make for happy customers. It’s a winning philosophy, that Chris Leggio, Mark Christopher Auto Center -and maybe Chris’ kids, plan on keeping going for a very long time…

SHOP FROM HOME FOR YOUR PERFECT CHEVROLET!

WE WILL DELIVER YOUR VEHICLE STRAIGHT TO YOU!